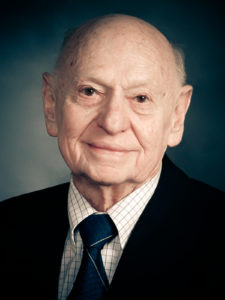 Alexander R. Margulis is Professor Emeritus in the Department of Radiology, Weill Cornell Medical College of Cornell University. He earned his MD degree from Harvard Medical School in 1950. For 26 years — from 1963 to 1989 — he served as Professor and Chair, Department of Radiology, University of California, San Francisco (UCSF), creating a model academic clinical department of radiology that included many outstanding basic scientists. Under his enlightened and steadfast leadership, the members of his department added many new dimensions to the field of biomedical imaging, establishing the discipline of radiobiology through federally-funded laboratory work, and pioneering a range of new imaging technologies and applications, from MRI to interventional radiology (both terms that Dr. Margulis coined). Following his remarkable tenure as department chair, Dr Margulis was appointed Associate Chancellor (1989-1993) and Special Consultant to the Vice Chancellor (1993-1999). In recognition of his contributions for exceptional service to UCSF, in 2000 Dr Margulis received the University of California medal. In 2000 Dr Margulis moved to New York, where he took on a position as Clinical Professor of Radiology at Weill Medical College of Cornell University, New York.

Dr. Margulis’ entire career has been marked by extraordinary vision, the impact of which continues to be felt by physicians, scientists, and patients around the world. Time and time again, he has opened the eyes of the medical community to the potential of new imaging technologies and to the educational and organizational efforts needed to move biomedical imaging forward to more promising ground. In 1971, having recognized the need for organ-based subspecialization in radiology, he founded the Society of Gastrointestinal Radiologists (which later became part of the Society of Abdominal Radiology). In 1980, when MRI had only just begun to be applied in clinical research, Dr. Margulis co-founded the International Society of Magnetic Resonance in Medicine. Furthermore, the International Society for Strategic Studies in Radiology (IS3R) was itself largely the brainchild of Dr. Margulis, who realized long before the advent of the Internet that the field of radiology was truly global, and that high-level international collaboration was required to help it meet global medical challenges.

Dr. Margulis has also made tremendous contributions to the field of biomedical imaging through his own research in gastrointestinal radiology and has published more than 280 manuscripts and 21 books. He is widely recognized and lauded for his teaching and mentorship. While at UCSF, he established international research radiology fellowships, with fellows selected and funded by their own universities in Europe and Asia; after learning how to do research – and often receiving inspiring professional mentorship from Dr. Margulis – the fellows returned to their countries and proceeded to greatly advance the field of imaging worldwide. His contributions as a teacher were most recently recognized in June 2013, he received the teaching award from the Department of Radiology, Weill Cornell Medical College of Cornell University.

In recognition of Dr. Margulis’ unique and stellar contributions to the field of biomedical imaging, two endowed positions have been named for him — the Alexander R. Margulis Professorship in Molecular Radiology at Weill Cornell Medical College, and the Alexander R. Margulis Professorship at UCSF, which is filled by the chairman of the department of radiology and bio-imaging at that institution. Dr. Margulis has received other honors and awards too numerous to list here. These include eight honorary doctorates in medicine, awarded between 1980 and 2005 (from, in chronological order, Aix-Marseille University, Aix-en-Provence and Marseille, France; Université Catholique de Louvain, Louvain-La-Neuve, Belgium; Medical College of Wisconsin, Milwaukee, USA; Karolinska Institute, Stockholm, Sweden; Ludwig Maximilian University, Munich, Germany; Université Paul Sabatier, Toulouse, France; Université de Montpellier, Montpellier, France; and University of Novi Sad, Novi Sad, Serbia). He is a member of the Institute of Medicine of the National Academies in the USA, and a “foreign” member of both the Serbian Academy of Arts and Sciences and the Russian Academy of Medicine. He has received multiple gold medals, honorary medals and honorary memberships.

Since co-founding the IS3R, Dr. Margulis has continued to ensure its vivacity by attracting key leaders from industry and academia from around the world to take part in it. It is with gratitude for his founding of and invaluable service to the society, as well as for his many years of courageous and visionary leadership in the field of biomedical imaging, that the IS3R awards Dr. Margulis its 2013 Gold Medal.