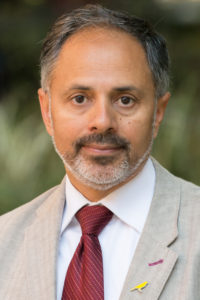 It is with profound sadness that we share the news of the passing of our dear friend and colleague Dr. Sanjiv Sam Gambhir, IS3R Past President, on July 18, 2020 at the age of 57.

Dr. Gambhir was born in Ambala, India in 1962 and, together with his family, immigrated to the US when he was just seven years old. He graduated with a BS in Physics from Arizona State University in 1983 and then entered the combined M.D-Ph.D. Medical Scientist Training Program (MSTP) at the University of California Los Angeles (UCLA). He received his Ph.D. in Biomathematics in 1990 and his M.D. in 1993. An internship at the Center for Heath services in Internal Medicine was followed by a Residency in Nuclear Medicine at the same institution. In 1994, Dr. Gambhir became Assistant Professor, Department of Molecular and Medical Pharmacology, Department of Biomathematics as well as Director of the Computational & Communication Sciences Division at the Crump Institute for Molecular Imaging, whose Director he would become in 2001. This position was followed by appointments as Vice Chair, Department of Molecular & Medical Pharmacology, in 2002 and as Adjunct Professor, Department of Molecular and Medical Pharmacology, Department of Biomathematics, Crump Institute for Molecular Imaging in 2003.

In 2003, Dr. Gambhir joined the Stanford faculty as a Professor of Radiology to direct the Molecular Imaging Program at Stanford (MIPS) and to head Nuclear Medicine. In 2005, he additionally became affiliated Professor at the Department of Bioengineering. He moved on to become the Virginia and D.K. Ludwig Professor for Clinical Investigation in Cancer Research (endowed professorship) and the Director, Canary Center at Stanford for Cancer Early Detection in 2009. Following an appointment as affiliated Professor at the Department of Materials Science and Engineering in 2010, Dr. Gambhir became Chairman of the Department of Radiology, School of Medicine in 2011. In 2016, he established the Precision Health and Integrated Diagnostics (PHIND) Center and has served as its Director since.

A true pioneer in molecular imaging with an emphasis on cancer imaging and diagnostics and a champion for precision health, Dr. Gambhir advocated that the earlier detection of disease will be key in improving human health. His prolific research record includes over 680 papers, more than 40 patent applications, and innumerable honors and awards for his contributions to radiology and, in particular, molecular imaging and nuclear medicine. In addition, he served on the editorial board of several journals including Nano Letters, Nature Clinical Practice Oncology, and Science Translational Medicine, was involved in foundation of several biotechnology spin-off companies, and acted as a scientific advisor for multiple companies.

Dr. Gambhir was an elected member of the Institute of Medicine (IOM) of the US National Academies and a Fellow of the American Association for the Advancement of Sciences (AAAS). He held numerous leadership roles at several national and international societies including the Society of Nuclear Medicine (SNM), Radiological Society of Northern America (RSNA), the American Association of Cancer Researchers (AACR), the World Molecular Imaging Society (WMIS, President 2016-2017), and the International Society for Strategic Studies in Radiology (IS3R, President 2017-2019).

Dr. Gambhir has been a member of our society since 2010 and, over these 10 years, has significantly contributed to the advancement of our society. As a member of the Executive Board from 2011, he helped shape the strategic vision for our profession, and in particular during his presidency from 2017 to 2019, we benefitted from his insightful and exemplary stewardship and his commitment to mission of the IS3R.

Dr. Gambhir was an inspiration to all who knew him, a brilliant mind and a true leader of our field. His passing is a great loss to our society and our community as a whole. Our heartfelt condolences go to his wife Aruna and his family. He will be missed but not forgotten.