It is with sadness that we share the news of the passing of our friend, mentor and inspirational role model, Alex Margulis, MD. Alex passed away at home on September 7, 2018. He is survived by his very loving wife, Dr. Hedvig Hricak, son Peter, his daughter in law Nicole, and his two grandchildren, Maia and Alexander Hricak. Alex, as he preferred to be called by all, was a global visionary leader of radiology, beloved by physicians at UCSF and throughout the world. Alex touched the lives and careers of innumerable radiologists and scientists and he enriched us all with his humor, leadership and sagacious support of imaging science. He was the heart of UCSF Radiology for the 26 years of his chairmanship that spanned 1963 to 1989. He led the extraordinary evolution of imaging that began with the early days of CT, MRI, US, PET-CT, interventional radiology, molecular imaging and other modalities. His impact on the health of individuals everywhere and the careers of myriad radiologists in the United States and abroad cannot be overstated.

Alex was born March 31, 1921 in Belgrade in the former Yugoslavia. He was a medical student at the time of the German invasion in April 1941. The family escaped Nazi persecution in Yugoslavia in 1944. Alex and his family were fortunate to be on the only ship of refugees to travel from Naples, Italy, to the United States during World War II. This remarkable journey is captured in a memoir by Ruth Gruber entitled Haven: The Dramatic Story of 1,000 World War II Refugees and How They Came to America. Despite intense opposition to immigration to the US at the time, President Franklin D. Roosevelt approved the creation of a temporary settlement camp in Oswego, New York, for these 1000 refugees. With the help of Eleanor Roosevelt, the refugees were permitted to enter local schools. Alex and his brother, Ralph, who both had been medical students in Yugoslavia, were then able to take classes at Oswego State Teachers College. There, during an assembly celebrating VE day, Alex gave a remarkable talk about his war experience and expressed his appreciation of his stay in the US. The President of the Teachers College, who was in attendance, was so impressed by the talk that he called the Dean of Harvard Medical School and strongly recommended his admission. Remarkably, both brothers were admitted.

In later years, Alex did not relish talking about the war, but many of the lessons in leadership he learned as an officer in the US Army he later shared with those who had the good fortune to be exposed to his mentorship: “Be first in line on the battlefield but last in line for chow.” Following a residency in Diagnostic Radiology at the University of Michigan, he joined the faculty at the University of Minnesota in 1954. He became a US citizen and then served in the US Army Medical Corps at Fort Bragg, North Carolina. There he was a clinical radiologist as well as chief of medical education. As such he was responsible for leadership of all of the hospital’s medical programs, foreshadowing his later career. After his Army service he joined the faculty at Washington University in St Louis as an Assistant Professor, quickly rising through the ranks to full professor in 1961.

Alex was recruited to UCSF to chair the Department of Radiology in 1963 and served in that capacity for the next 26 years. Under his leadership, UCSF became one of the most pre-eminent academic departments of radiology in research, clinical care and education in the world. His impact was felt throughout medicine as he supported the development of CT, MRI and molecular imaging. Many recall the plethora of articles authored by UCSF faculty in each month’s edition of Radiology and other journals. Innumerable radiologists and scientists were trained and mentored by Alex and went on to important leadership roles at other academic institutions in the U.S. and abroad. Alex was instrumental in building the fields of magnetic resonance imaging and molecular imaging and had a unique ability to visualize the future of what imaging and image-guided therapies would bring to the world.

Following his extraordinary service as Chair of UCSF Radiology, Alex continued to provide institutional guidance as the Associate Chancellor (1989-1993) and then as Special Consultant to the Chancellor (1993-1999). In 2000, his wife, Dr. Hedvig Hricak, became the Chair of Radiology at Memorial Sloan Kettering in New York. Alex joined Hedi and became a Clinical Professor of Radiology at The Weil Medical College of Cornell University where he was loved and respected by all.

Most importantly, Alex was beloved by his many resident trainees, who to this day revere him as a friend and mentor. “You will call me Alex,” were his first words to new residents starting their training. They viewed him as an avuncular father figure, always willing to help and encourage them in their endeavors during training and after leaving UCSF. In one-on-one encounters with his young faculty, Alex was nurturing in multiple ways, whether the issues were personal or professional. He imparted invaluable wisdom in how to achieve goals, and how to constructively interact with both colleagues and competitors. It should be added that Alex was regarded by all as a master negotiator. There were simply none better!! 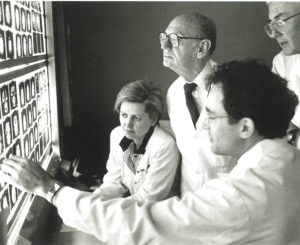 Alex’s leadership was fundamental to the exciting and meteoric evolution of Radiology. He took risks and invested in untested ideas supporting the dreams of faculty who made amazing contributions to imaging including CT, MRI, ultrafast CT, PET-CT, SPECT-CT, and molecular imaging. Under Alex’s guidance, the department acquired the second head CT scanner in an academic institution in the United States, produced at that time by EMI. In 1971, it was an enormous risk of unproven technology, at a cost of close to $500,000 ($3.5 M today). The high profile of the ensuing research and publications, and the subsequent acquisition of a large bore EMI body scanner, convinced General Electric to install its prototype fanbeam rotate scanner at UCSF. It became a mutually rewarding relationship for both GE Medical Systems and UCSF. Alex again undertook significant risk in his support of Leon Kaufman, PhD and Larry Crooks, PhD in their remarkable efforts to create the first commercially available MR unit employing a supercooled magnet. Alex Margulis made UCSF Radiology a “required” destination for all leaders interested in enhancing the roles of digital imaging techniques. He created a department that was international in its outreach.

Alex recognized the importance of communication and interchange of ideas among radiologists and relevant stakeholders from around the world. Among the key challenges facing radiology was the need for effective management of the rapidly emerging new imaging technologies to facilitate excellent research in clinical applications, optimize training, technology diffusion and resource utilization. In 1978, working with Drs. Melvin Figley, Richard Greenspan, and Charles Gooding, he organized the first in a series of symposia on the impact of new radiological technologies on healthcare, research and teaching, held in San Francisco. Invitees included leading figures from academic medicine, industry, and government from around the world. These meetings continued every 2-3 years.

In 1994, the need for enhanced focus on the issue of cost effectiveness and the recognition of the importance of global interchange led to the formation of an international organizing committee under the auspices of Drs. Margulis and Stephen Goldring of Oxford, who organized a series of three international symposia on cost effectiveness in radiology, the last of which was held in 1999.

The success of these various symposia spurred the creation of an international society to identify and address shared issues related to emerging technologies globally. In 1999, the International Society for Strategic Studies in Radiology (IS3R) was founded and registered in Austria. Consistent with the goals of the earlier symposia, its mission is “to actively shape the future of medical imaging and image-guided therapies by leveraging the knowledge and influence of world leaders in these disciplines and in related industries. By assessing the potential impact of disruptive innovations on global healthcare, the IS3R aims to inform and guide clinical practice, medical science and healthcare policy.” Dr. Margulis continued to play an active role in the Society over the years, as it grew in size and stature.

Alex trained a generation of trailblazers. He was a founding father of the field of gastrointestinal radiology, and generously shared with Dr. Richard Marshak the early leadership of the new Society of Gastrointestinal Radiology that later merged with the Society of Uroradiology to become the Society of Abdominal Radiology. In addition to IS3R, Alex was also a co-founder of the International Society of Magnetic Resonance in Medicine (ISMRM). He published more than 280 manuscripts and 21 books including his seminal Alimentary Tract Radiology – the first textbook on gastrointestinal radiology. His awards are too numerous to count. Several that were especially meaningful to him include eight honorary doctorates, the J. Allyn Taylor International Prize in Medicine, the University of California Medal, and the Gold Medal of the Radiological Society of North America.

In 2014, he was appointed to the rank of Chevalier of the French Legion of Honor by the President of France for educating most of the present leaders of French radiology during his years at UCSF.

Alex will be missed by friends and colleagues at UCSF, Weill Cornell and throughout the world. He will be remembered as a brilliant, visionary, generous and caring leader. He was truly exceptional.